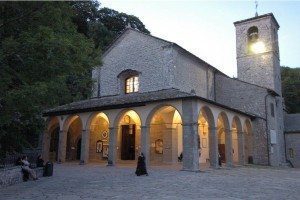 Begin by leaving the La Verna sanctuary, having first filled your canteen with water (the next source of potable water is at Pieve Santo Stefano). Pass the statue depicting the famous episode in the life of Saint Francis in which the saint persuaded a child transporting doves to market to free them, instead, (FF 1853) and continue along the road as it descends. At the curve, leave the road and take the unpaved trail which leads straight into the woods, following the signage for “Croce della Calla – Sentiero Frassati” (km 0.60). Continue as the trail skirts the thick woods until the fork. At the fork, take the ascent to the left, following the signage for “Sentiero Frassati – Anello Basso – CAI 50 – 55” (km 0.95). Continue straight past a number of forks to the left until reaching Croce della Calla, 1.140 MAMSL, (km 1.19), where you will first take the fork to the right, and then turn right again following the wooden signage for “Tre Vescovi”. Begin the steep climb until the trail forks (km 1.34), where you will continue toward the right, skirting a pine grove. Begin another steep climb on trail 50, following the painted signage along the route. The trail climbs to a conifer wood (km 1.91) and curves to the left. At the painted signage for “GEA 50” and a “Tau” on the bark of a tree, begin climbing to the right until the peak (km 2.03) of Monte Calvano, 1250 MAMSL. Continue straight to the meadow, where you will find signage for “Cammino di San Vicinio and Monte Calvano 1253 mslm”. Stop for a moment to take in the uninterrupted panoramic view of the Apennine mountain chain from this treeless meadow. Cross the length of the meadow, maintaining your altitude and continuing straight until your reach the wooden arrows at the far end. Take the trail to the left, following the signage for “Pieve S. Stefano – Cerbaiolo – CAI 50” descending along a shaded tractor track. At the fork (km 2.79) keep right, continuing toward Pieve S. Stefano. At the next crossroad, descend to the left, passing a green gate and pausing again to take in the gorgeous Apennine countryside. After 500 meters, pass two gates and descend to the fork (km 4.22), where you will turn left towards Poggio Tre Vescovi. At the intersection (km 4.33), continue straight, following the vertical signage until you reach Passo delle Pratelle, 1075 MAMSL. Here you will take the wide trail 066. You will come to a series of two crossroads; at the first continue straight, at the second veer right (there is a metal fence to the left). At the signage (km 5.3) indicating “Assisi – Pieve S. Stefano – Cerbaiolo”, leave the tractor track to begin climbing trail 075. After little over 1 kilometer into the woods, the trail leads into a wide tractor track which climbs to the top of Monte della Modina, 1181 MAMSL. From the peak (km 6.19), follow the CAI trail 075 toward Pieve S. Stefano. Here you will cross about 1.5 kilometers of thick woods; keep a careful eye out for the red and white painted trail markings. The trail begins to widen and forks (km 8.26); veer right. Continue for a level stretch until you reach the crossroad (km 8.87); here follow the signage for “Pieve S. Stefano” along trail 075. After passing over a chain roadblock, the trail becomes a sunny unpaved road. Begin descending past a green antenna tower (km 9.2) until reaching the main road. Near a grouping of houses and the Asnavara riding stable (km 11.5), continue straight in the direction of Pieve S. Stefano. Take the asphalt road and continue through two crossroads (km 12.1 and km 13.15), following the signage for “Pieve S. Stefano”. Cross over the highway overpass, coming out on Via della Casina, which you follow until the road ends. At the intersection (km 13.77) with the SP Tiberina, turn right following the vertical signage until you reach the Città del Diario (km 15).