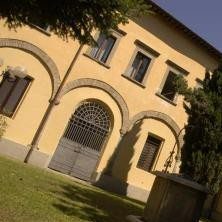 In the first stretch from Città di Castello to Il Sasso, ignore the signage for the Way, instead taking this alternative shortcut which avoids a few climbs. From Piazza Matteotti cross Corso Vittorio Emanuele, lined by Renaissance and Baroque palazzi. After passing Porta di Santa Maria Maggiore, cross Viale Leopoldo Fianchetti and continue on Via Rignaldello. At the traffic circle, turn right on Viale V. Emanuele Orlando where you can see to the left the former tabacco drying sheds, now the Alberto Burri Museum. Pass a pond and a park, continuing on Via Roma. At the Didon Restaurant (km 1.77), pay close attention to the signage directing you to turn left for Pietralunga. Pass the railway overpass, then turn right on Viale Stelio Pietrangeli, following the signage for “Il Sasso – Pietralunga”. Continue on the SP della Baucca (km 2.46), being careful of passing cars. At the curve (km 5.43), turn left to meet up with the route of Saint Francis’ Way. At località Il Sasso (km 6), it is a good idea to rest and stock up on food and water. Continue on the Strada della Baucca; at the marked intersection (km 7.81), turn right. Begin the first climb of this leg, long but not steep. At the end of the climb (km 10.27) there is a beautiful view of the terraced olive groves. Continue along the asphalted road until reaching Collevecchio (km 10.70). Ignore the side road passing through the hamlet, instead continuing on a long climb–not particularly challenging as it is not steep—until reaching a side road for località Candeggio, 649 MAMSL (km 13.75). In the nearby farmhouse, there is a friendly family always happy to lend a hand to passing pilgrims. Pass the side road for Candeggio, reaching località Campanile, 600 MAMSL (km 16.10). You can see the Medieval tower of Pieve de’ Saddi in the distance, which you will reach in less than one kilometer. At the church of Pieve de’ Saddi (km 19.41), pause for a rest (there is a series of ascents and descents coming up) and stock up on water at the fountain. After a long stretch, during which the silence invites contemplation, you will reach località Caigisti (km 24). A long uphill climb begins here—pace yourself. At the grouping of houses (km 26.77), you will be able to see the town of Pietralunga on the opposite hillside. After a series of marked crossroads, descend to the left (there is a bench marking the trail) on a mule path (km 27.98). At the abandoned chuch, begin the final climb to Pietralunga (km 31), first along the road, then up a flight of stairs.