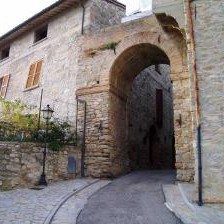 From the small square on Via San Benedetto turn right on Via Castellana. Continue straight through an intersection; after crossing the bridge, you will arrive at località Il Pioppo (km 1.8). Begin a gradual climb. Near a large shed (km 2), turn right and make two short, steep climbs to top the crest which separates Valfabbrica from the Assisi Valley. At the top of the crest (km 4.9), you can see Assisi’s Rocca Maggiore fortress in the distance. At the iron cross (km 5.6) pilgrims traditionally leave a stone to mark their passing. At the cemetary of Pieve San Nicolò (km 5.8) the shady benches are a good place to stop and rest. Begin descending; keep watch for the view of the imposing Sacro Convento and Basilica di San Francesco with the town of Assisi stretching across the hillside in the distance. This is one of the most moving moments of the pilgrimage, a Franciscan Monte do Gozo with its promise of the joy of arrival. Near a shed (km 7.3), descend carefully to the left on a rocky tractor track. You will reach a rest stop with a table and benches (km 7.7) overlooking a landscape of olive groves and vineyards, topped by wooded hills. Take the easy ford, then continue through the rolling landscape. At the intersection, turn left on Via San Vittorino, where the locals have dedicated a statue to Saint Padre Pio da Pietrelcina, usually decorated with flowers and candles. Continue along the asphalt road, passing a Medieval bridge on the right. Continue on to the Ponte de Galli and the Chiesa di Santa Croce (km 12.11). The lower entrance to the FAI’s Bosco di San Francesco is on the right, which can be used as an alternative route to the asphalted road uphill (there is a suggested donation to enter). Begin the last climb of the route. Enter Assisi through Porta San Giacomo, from which pilgrims once left the city to journey to Santiago de Compostela. After passing through the city gate, take the road downhill to the right. The majestic facade of the Basilica di San Francesco (km 14.5) illuminated in the sunlight is your pilrimage’s first reward. On the lawn, a hedge forms the Franciscan greeting of PAX. You have arrived at the most important moment: pass through the portal of the Basilica Inferiore to reach the tomb of Saint Francis. Here, in the soft light of the eternal flame, stop to pray and contemplate your completed pilgrimage.