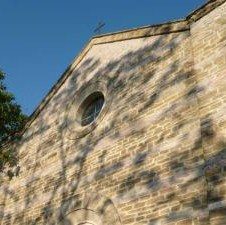 From the main square in Valfabbrica follow Via San Benedetto toward a small church. Many stretches of the route toward Perugia are near work sites for a new highway under construction at least until 2015, so be cautious. After passing the Chiascio River, turn left at the intersection (km 0.75). Pass the recycling center (km 2.10) and begin to climb the asphalt road to Monteverde. The climb is gradual without steep stretches, and the view opens up over the narrow Valfabbrica valley as you ascend. At the end of the climb (km 5.5), you will reach Monteverde, 545 MAMSL, from where you can see the outline of Perugia in the distance. At the crossroads, turn left downhill to Pianello (km 8.9). At the intersection with Via delle Marmore, turn right to leave the village. This stretch has heavy traffic, so be careful. Before reaching the exit ramp, turn left at the marked crossroads (km 10.57). At the next marked crossroads (km 11.15), turn right uphill on an unpaved road through the fields. At the end of the climb, turn left and then left again onto Via Montefalco (km 13.10) reaching, shortly afterwards, Ripa (km 14). Cross the length of the hamlet to reach the overlook on Piazzetta del Montarone, from where you can see Assisi and the Basilica of Santa Maria degli Angeli in the distance. Continue on, taking the stairs down until you reach the asphalt road and turning toward Via degli Arnati. Continue on the road that begins descending and then levels out among farmhouses and olive groves. Begin climbing on an unpaved road until the signage (km 16.10) for “Sant’Egidio”, continuing on a gradual incline. At the marked crossroads (km 16.8), descend to the left on Via del Richiavo, leaving the paved road and passing through the Perugian countryside. At the cross (km 18.7), turn left and enter the town of Lidarno. At the marked crossroads, turn left onto the paved road. Near the E45 underpass (km 19.3), be very careful of the traffic on the exit ramp. Continue straight along Via Casciolano, following the signage for Pontevalleceppi. At the crossroads (km 21.5), continue straight on Via Bologna, turning left when you reach Via Ravenna. At the Church of Santa Maria Maddalena, turn right to meet up with the walking path along the Tiber River (km 22.3). Cross the pedestrian bridge and continue toward the Torre di Pretola tower (km 23). Take Via Forlì, continuing towards the railway bridge. Begin to climb, first gradually and then with an increasing incline. At the well-marked crossroads, continue straight on an unpaved road with a number of steep climbs. After less than one kilometer, turn left at the intersection (km 25.5), climbing Via Eugubina. Continue along this busy road until the traffic circle (km 26.7); continue straight for 500 meters on Via San Giuseppe, climbing the steep stretch to the Medieval city gate of Porta Sant’Antonio. Ignore the signage directing you to turn right here, instead pass the gate and descend Corso Bersaglieri. At the crossroads, turn right on Via Pinturicchio and reach the imposing Arco Etrusco (km 27.8). Pass under the arch, taking the last climb up Via Ulisse Rocchi to the Cattedrale di San Lorenzo and the Medieval center of Perugia (km 28.2).