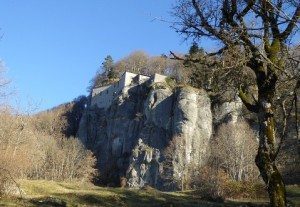 It takes place between Romagna and Tuscany, in a landscape that sweeps over the ridges between the Valmarecchia, the Valley of the Savio and the Tiber Valley.

This path is well marked by white and red signs, supplemented by the yellow Tau that identifies all the Path San Francesco from Rimini to Rome.

Leaving Balze, we take the road for Verghereto to the village of Falera, where, on the right, there is road that climbs towards the rock face of Mount Fumaiolo.

The paths is distinguished by wooded pastures and strokes, following the signs for Montecoronaro, a small village where you can find refreshment in a bar. After the village and a long stretch of paved road, there is that begins with a long climb through the woods, leading to Poggio dei Tre Vescovi (1238 m). Here the ridge trail, which is part of an ancient medieval street, goes far to the south along the border of the Nature Reserve Upper Tiber Valley and, after a flat stretch, it reaches a hill from which one sees the Monte Penna, unmistakable for its large and flat top, behind which stands La Verna. The path becomes a track drawn in coppice reaching a cross path and, to the right, a wide dirt road. Follow it in a grazing land, reaching Step Gualanciole and, after a few kilometers, the Passo delle Pratelle (1075 m), the conjunction with the Franciscan path that leads from La Verna in Rieti.

He turns on the track right on the ridge, first through meadows and then in the pine forest and then the beech forest, you climb to the great grassy shelf and panoramic Monte Calvano at the beginning of the forest (1253 m).

It descends steeply to the Calla Cross (1135m), under the wall of Mt. Penna. Follow it to the left to reach a wider road that to the right in the beech forest to the Sanctuary of La Verna (1128m).